GL Coaching presents this twelve week indoor progressive training program. Power Cadence is a system of cycle training developed by Greg Lynch for the thinking athlete based on biomechanical principles and experience.

The winter course caters to the needs of all cyclists, from beginners to elite athletes. In these sessions, you will learn the fundamentals of Power Cadence. We will breakdown the movements of powering the pedal and learn the Power Cadence revolution with the aim of making you work smarter, not harder.

Bring
Your own bike, water and towel. There are only 20 indoor trainers available. If the class fills you may have to bring your own.

Drop-in price is $15.00 per session. Please note that spaces are limited and you may have to
bring your own indoor trainer.

*Eden Bicycles does not manage registrations or payments for this class.

Greg Lynch has 24 years of Triathlon experience and has been a registered FT Professional Triathlon Coach with Triathlon Australia since 2001. He completed his Level 1 Triathlon coaching qualification. In 2002, he became Head Coach for the Intraining Triathlon squad within the Intraining Running and Triathlon Club. In 2004 he formed his own Triathlon Club: "Phoenix Triathlon" which continues to be in operation. In 2005 he completed his Level 2 Triathlon Coaching assessment with Triathlon Australia at the Australian Institute of Sport and participated in the High Performance workshop. The athletes he has trained have raced at National and International levels with strong representation in the Australian Age Group teams. 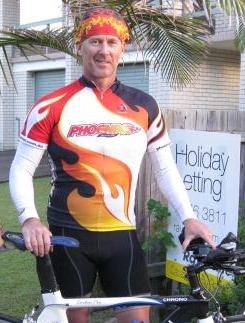